How To Make A Rainbow Cake

Hi, it’s Robin! Today we’re going to be making a rainbow cake which is really popular for children’s birthday cakes, but also they’re sneaking into the weddings as well because they are so bright and colourful.

So I have a large bowl of vanilla cake mix here. It’s a very popular cake that we make and it is the basis and starting point of a rainbow cake. We use flour, butter, sugar eggs and some vanilla extract to make our sponge and it’s a really nice light but firm sponge, that’s perfect for making a rainbow cake which is actually quite a tall cake.

We divide the mixture into six, I’m going to show you how to do that with three, because we’re going to colour up the different layers of sponge. We have some of our food colouring; we mix it together in the vanilla sponge.

You want to make sure that you get all of the mixture through because otherwise some of your cake won’t be the nice rainbow colour. And exactly the same thing again! You want to make the colours quite strong because in the baking process they lose some of their colour. And then our last one is our red. You can mix it using a pallet knife, or a spoon.

Rainbow cakes have six colours, so we would do exactly the same for the yellow, the orange and the blue. We’ve lined the cake tin with baking parchment at the bottom and at the sides because it will be much easier to get the cake out once you’ve done that. 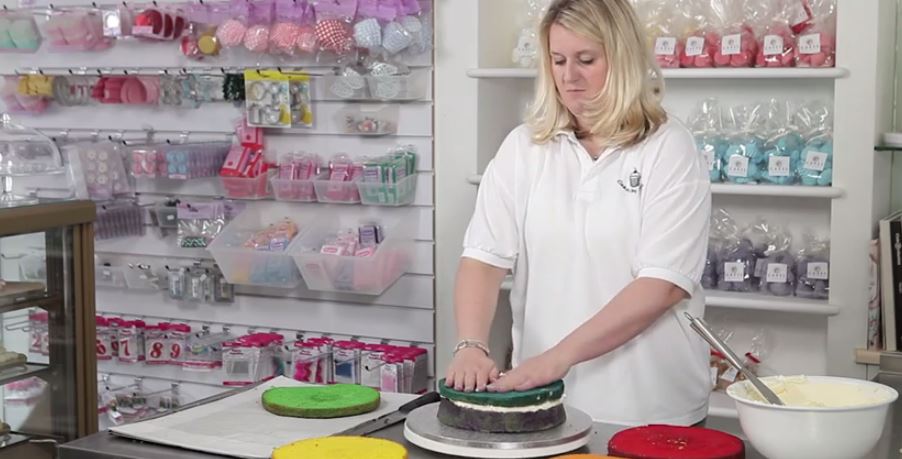 And you don’t want too thick a layer of cake because then it won’t bake evenly, you want to do quite a thin layer. Each layer should be about maybe five or six centimetres full of cake mix so that you don’t get too big a cake, because if you do it much thicker than that, with the six layers you end up with a huge cake that is impossible to slice.

These, because they’re not too deep a cake, they’ll probably cook in about 35-40 minutes at about 180 degrees in a pre-heated oven. So if you want to put them in the oven, maybe check them after about 30 minutes put a skewer in to make sure that the cake mix doesn’t come out, and then you’re ready to cool your sponges and start layering.

So our cakes are beautifully baked. We’ve taken them out of the oven and we’ve cooled them. I’m just going to show you how we trim off of the top of the cake to remove a little bit of the dry crust and it gives you this perfect finish to the cake.

So taking a knife, a serrated knife, you’re just going across the top of the cake, it also reveals the lovely purple. You’re just getting rid of that crumb topping. You don’t want to take off too much because you don’t want your cake to be too low.

So we have here a big pot of vanilla butter-cream. We make our butter-cream exactly the same way as anyone would at home, that is one part butter to one part icing sugar to a teaspoon or two to taste really of vanilla extract, because it is a vanilla butter-cream and then what we do is slightly different to at home. We have big mixers and we whip it up for about ten minutes, which you can do at home as well as it gives a really lovely light butter-cream.

So what we do is we layer on our butter-cream, layer up the blue. Push it down and keep it as even as possible. Then you repeat the butter-cream. The more butter-cream you have on your knife actually, the less crumbs you get in it. Then we move swiftly onto the green.

Then just our last one; the red. So you want, if you turn over the bottom one, a little tip is that you turn it over and you’ll get a perfectly flat top edge. And we’re going to do the top and the sides, icing it.

So we’ve taken the cake out of the fridge, it is now hardened up after about half an hour. The butter-cream is not quite so soft, and we can now start doing our second coat.

So the last bit, we finish off the top of the rainbow cake with a few multi-coloured sugar strands, a perfect topping for your beautiful rainbow cake for birthdays and weddings.